Iceland – Colours of the wild (22 photos)

Lush fjords, volcanic peaks, glittering icecaps and endless multicolour lava fields. Remote and natural. Sunny and warm (12°C). Such was Iceland in the beginning of July.

Couple of days in “must see” south to start. More time for severe highlands and completely forgotten by tourists yet amazingly charming Westfjords. Unpredictable Snæfellsnes and eclectic Reykjavík for the end.

This was the long story short. Photos will do the further talking. 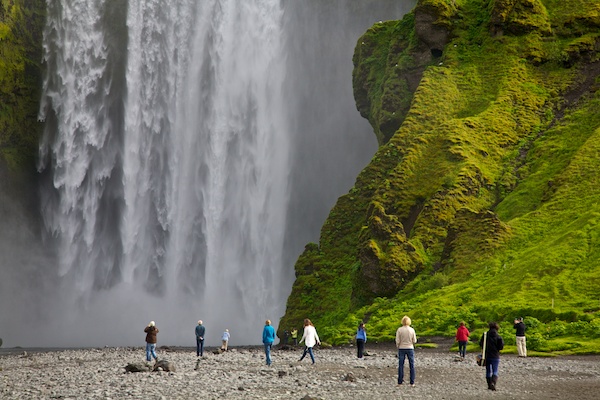 Skógafoss, one of the largest waterfalls in Iceland falling from a 62 meter cliff, a former shoreline. These rocks create a clear border between Highlands of Iceland and 5 km wide coastal lowlands that emerged when the coastline receded seaward. 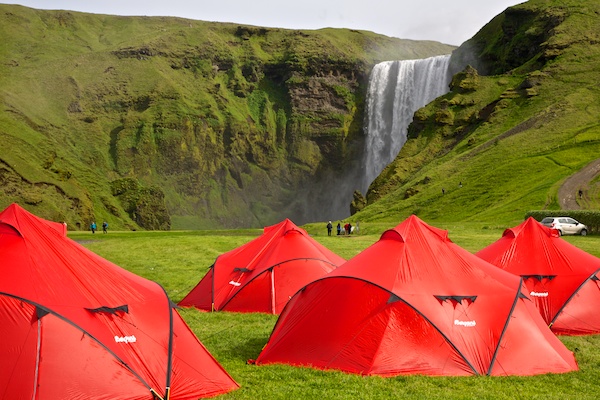 Wild camping is perfectly legal in most places and designated campsites can be easily found all over the island. As long as one can survive severe weather conditions, no other problems should arise. 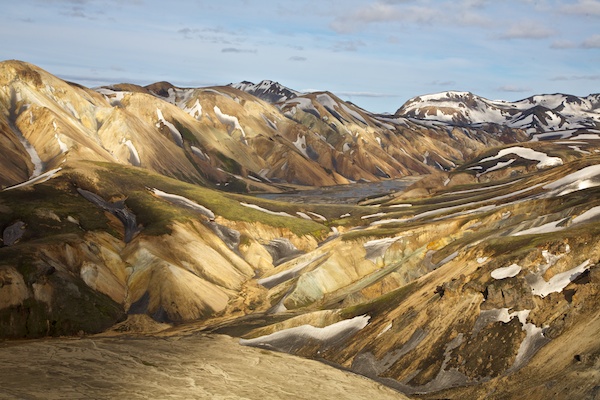 Due to poor road conditions accessible only from June to September, Landmannalaugar region in Southern Iceland is known for its exceptional variety of colours, hot springs and crystal clear lakes. Rhyolite – a colourful mineral filled lava that cooled down unusually slowly creates a unique and surreal setting. 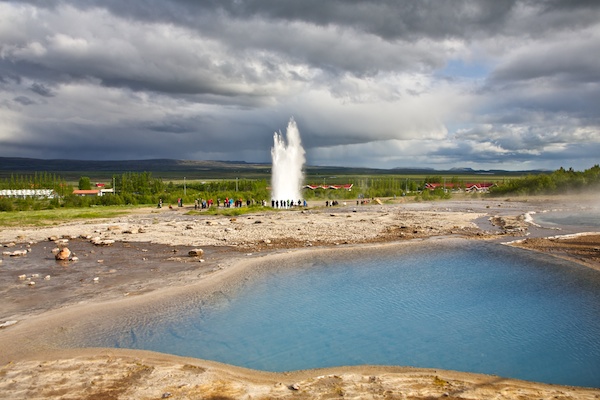 Strokkur, one of the most famous geysers in Iceland bursts up to 15-40 meters in to the air. Geysir, which is located nearby, gave birth to the word “geyser” and used to shoot up to 80 meters, but was clogged by tourists throwing stones into the spring while trying to set it off in 1950s. 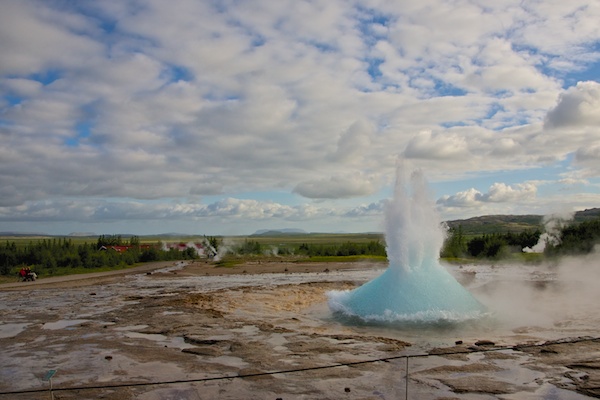 Geyser eruption takes place when surface of geothermally heated water, trapped in narrow fissures, cool down, superheated lower layers turn into steam and blast the cooler water above it. 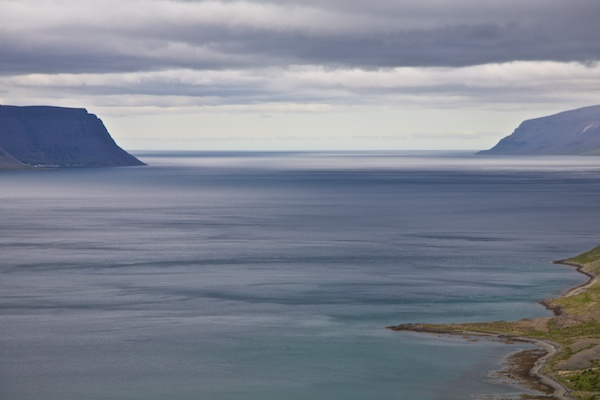 Tranquil mountains, hot springs and meandering fjords turn sparsely populated Westfjords into one of the most spectacular regions in Iceland. Isolated by limited roads and remote location, forgotten by tourists and loved by wildlife. Zigzagging roads make moving through the breathtaking desolate maze of peninsulas extremely slow. 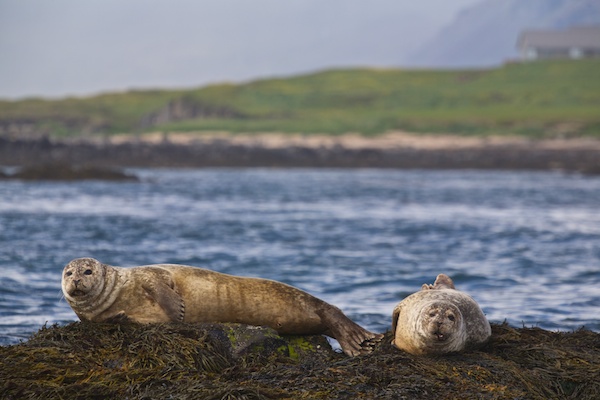 Distributed throughout the northern hemisphere, harbour seals (Phoca vitulina) grow up to 2 metres long and weigh around 100 kg. Their diet consists of a wide variety of fish, which is easiest to find in small reefs and scars deeper in the sea. After mating season in August ends, seals migrate away from the shore to search for food. 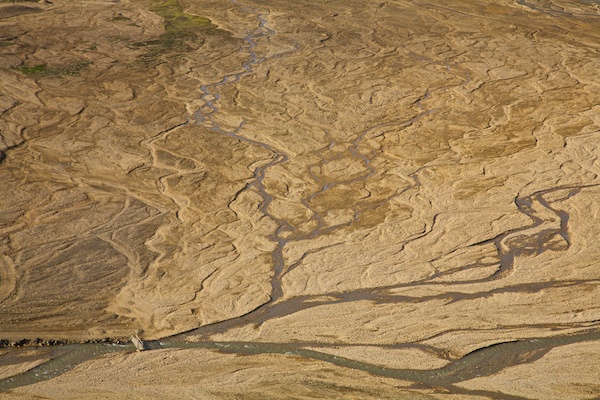 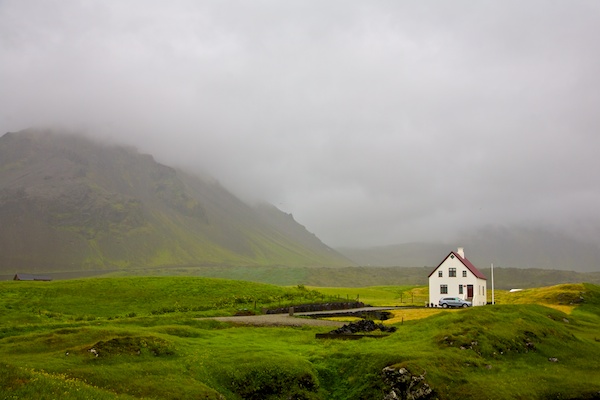 Largely affected by a Gulf stream, weather in Iceland is mild and unpredictable. Wet miserable days can revert to bright and sunny within a few hours. Rainfall remains constant throughout the year, but Eastern and Northern regions tend to be drier. 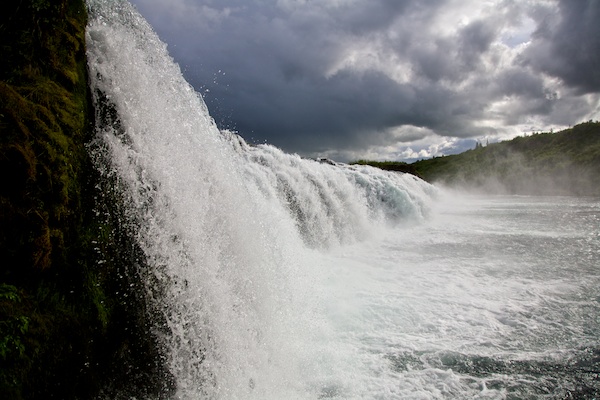 Because of high precipitation, Iceland has plenty of rivers which are relatively large. While most of them are glacial, spring fed streams are known for reliable water levels throughout the year and are well stocked with salmon, brown trout and arctic char. 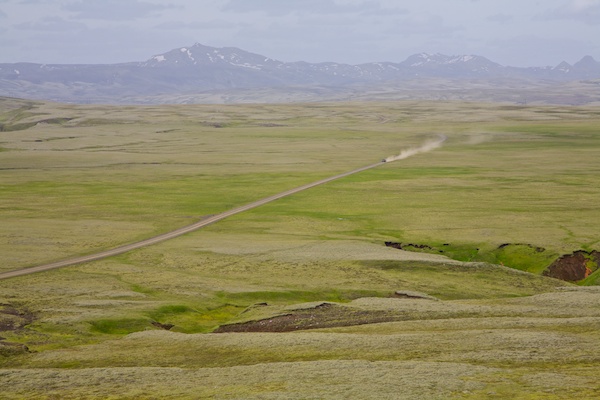 Word “desolation” gets a whole new meaning after visiting vast and empty highlands of Iceland. No accommodation, no bridges, no services. Only nature in its rawest, barest form. That’s what makes it unique and that’s the reason Apollo astronauts trained here for the moon landing. 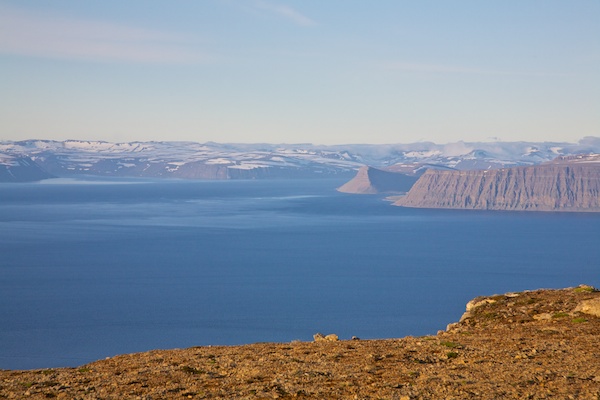 One of the most extreme and inhospitable parts of the island abandoned by its last villagers in 1950s, Hornstadir peninsula is home to one of the rarest and the only known terrestrial animal in Iceland, Arctic fox. Absence of roads, true untouched wilderness and challenging terrain makes it a perfect habitat for animals and a premium destination for hikers. 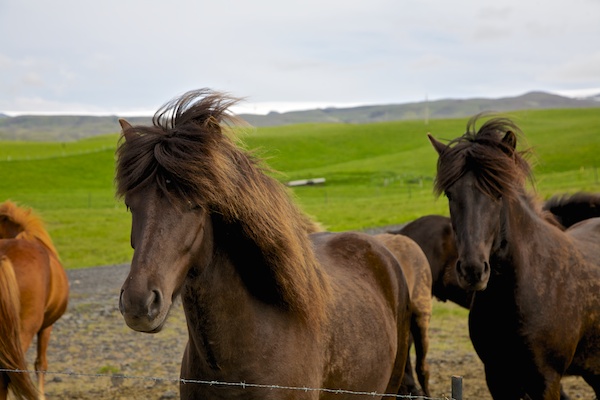 Mostly used during the autumn sheep roundup and recreationally, pure-bred Icelandic Horse (Equus Scandinavicus) is an integral part of local lifestyle. Similarly to some Mongolian breeds, they have two unique gaits and are “five gaited”. 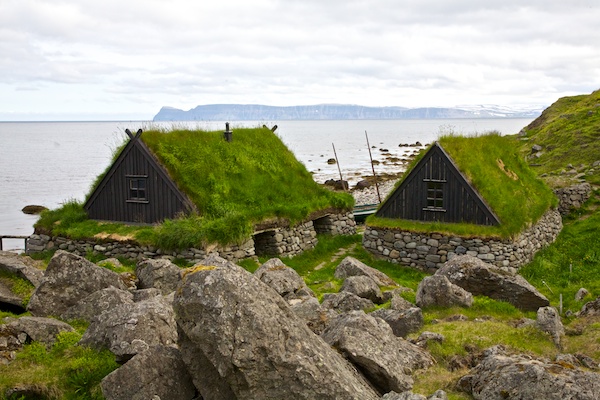 Only the simplest natural materials: stone, wood and turf, are needed to build an eco friendly turf house. Origins of these cozy dwellings are dating back to the Iron Age and wonderful heat retaining properties, where interior temperature stays stable regardless of fluctuations outside, remain impressive also today. 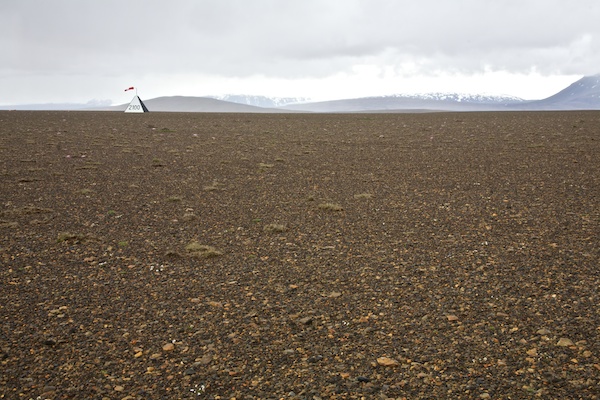 Besides the pyramid shaped sign, it is hard to spot any differences between the Kjölur airport and lava fields nearby. Located next to Kerlingarfjöll mountain rage that was believed to be home for the vilest outlaws and properly explored only in the middle of 19th century, nowadays the airport hosts charter flights bringing tourists to peek at the colourful landscape and well hidden hot pots nearby. 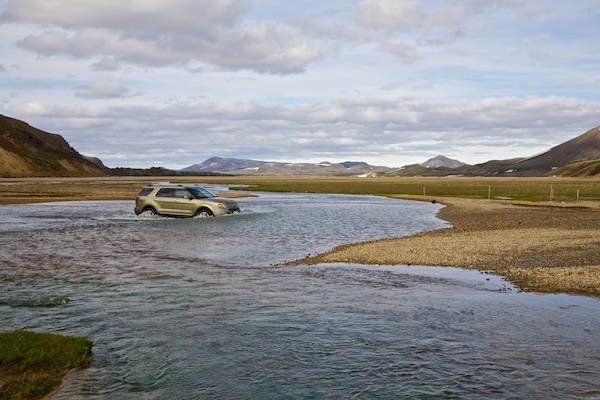 Mountain roads are usually closed from September to late June and very few are bridged, what makes river crossings unavoidable in the interior. Even during the high season, it is not likely that one is going to pas more than a handful of cars outside the ring road. 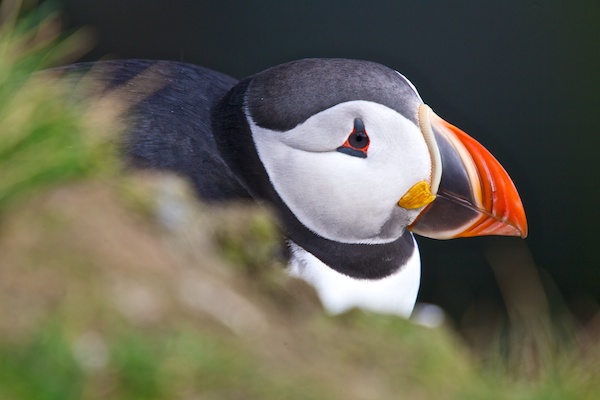 Spending most of the time at sea, almost two thirds of world’s population of Puffins (Fratecula arctica) come every summer to the shores of Iceland to breed. Cute and comic, goofy and frantic, penguins of the North are extremely graceful divers who keep the same mate and burrow for years. 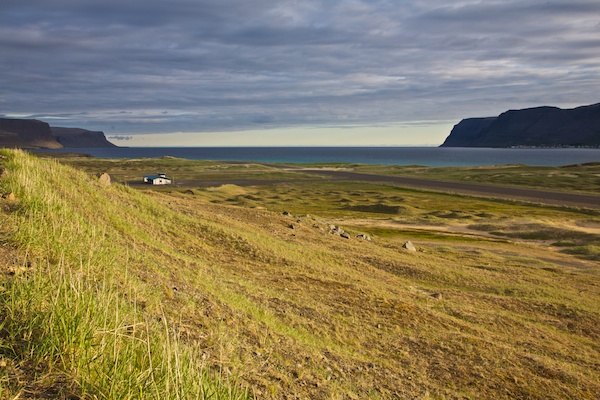 Connected to the rest of Iceland by a 7km wide isthmus, Westfjords are home to 7300 inhabitants living in tiny fishing villages scattered along the sinuous coast. Shoreline of 150km long “peninsula” stretches to over 2000km. 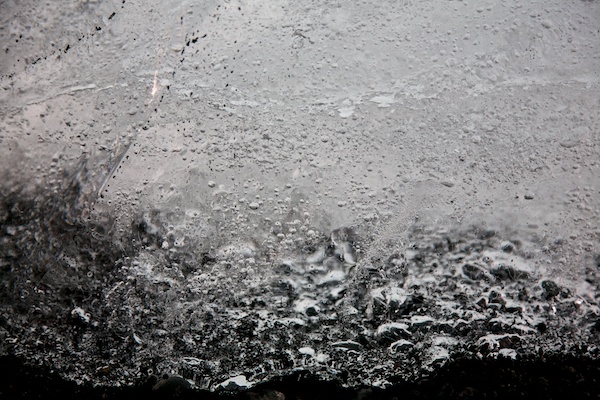 15% of Iceland is covered with glaciers and icecaps that started to form over 2500 years ago. In areas where it is never warm enough for the snow to melt, it piles up and compresses into ice, which eventually crushes the land below. Much of the island’s landscape and fjords was formed by these slow moving rivers. 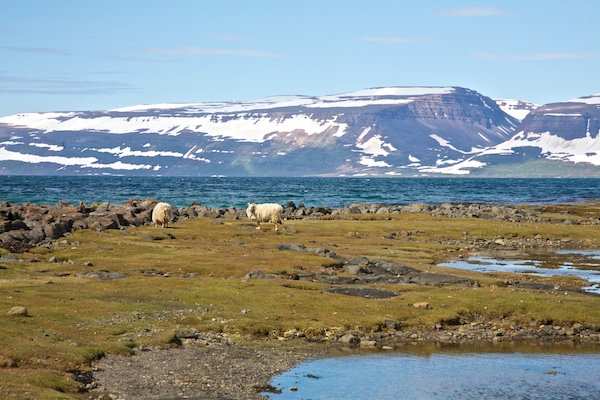 Sheep round-up is a tradition cherished by icelanders. On a horseback and with the help of sheepdogs every September farmers venture into the highlands to collect their sheep, and spend in the wild up to a week staying overnight in mountain huts. After all sheep are gathered and sorted by their earmarks, big celebration takes place. 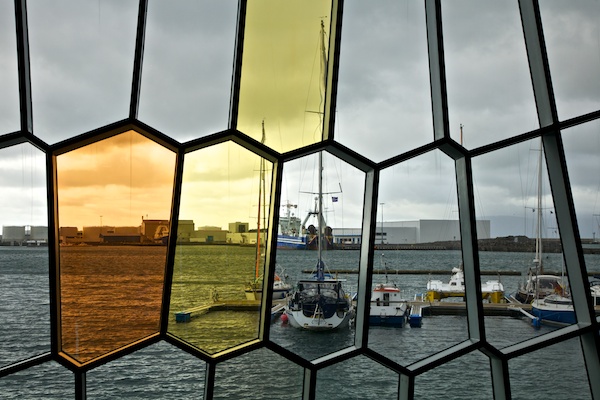 Harpa, new home of the Icelandic Symphony Orchestra and the Icelandic Opera, before the financial crisis was intended to be used for bank headquarters and luxury accommodation. Known for colourful geometric shaped glass panels, this building is open for the public and stays rarely empty nowadays. 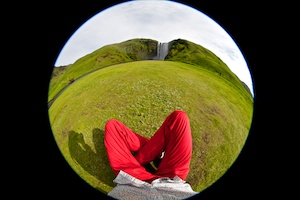 That’s the view through my eyes. Summed up in 22 photos. For a deeper look, check out the Flickr gallery here (part I) and here (part II), or read the post about boiling eggs using natural heat.